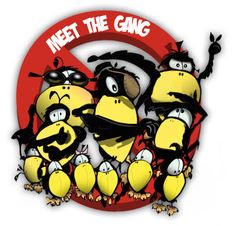 The first book of the series, due to be launched in July September 2021, follows the naughty antics of pesky crows in Ted & Oscar’s world. As you can see, due to ill health in the family, the launch date has been pushed to September however … the first initial draft of the book is being circulated to family, friends and critics (those involved with the most important people, the children who will read it).

The real Oscar, that the book is based on, is currently reading it for the first time and his opinions are eagerly awaited.

As the author I am curious as to which is the favourite character (after Ted and Oscar of course), and why? Maybe one of the naughty crows will be so popular that it will feature in the next T&O adventure book, which has already started to be drafted out. Anyway back to Scare Them Crows …

It is 64 pages long, and size A4, with numerous drawings on each page, with speech bubbles from all the characters, plus text boxes for the either adults to read, or the child who owns it and there are two ‘spot the differences’.

Quote from Scare Them Crows (see close up photos of the banner behind Andrew): ‘We’re all in trouble again‘ said Oscar. Fish is facing the lure of something in his fish bowl, but he’s not daft … Wormy has fallen in the fish bowl and is surrounded by a bubble, Grandy is in trouble as there’s a huge hole in mum’s best towel, Robbie is in a spin, Monkee is having a crafty lick of a spoon and Billy Wizz is riding into trouble again.