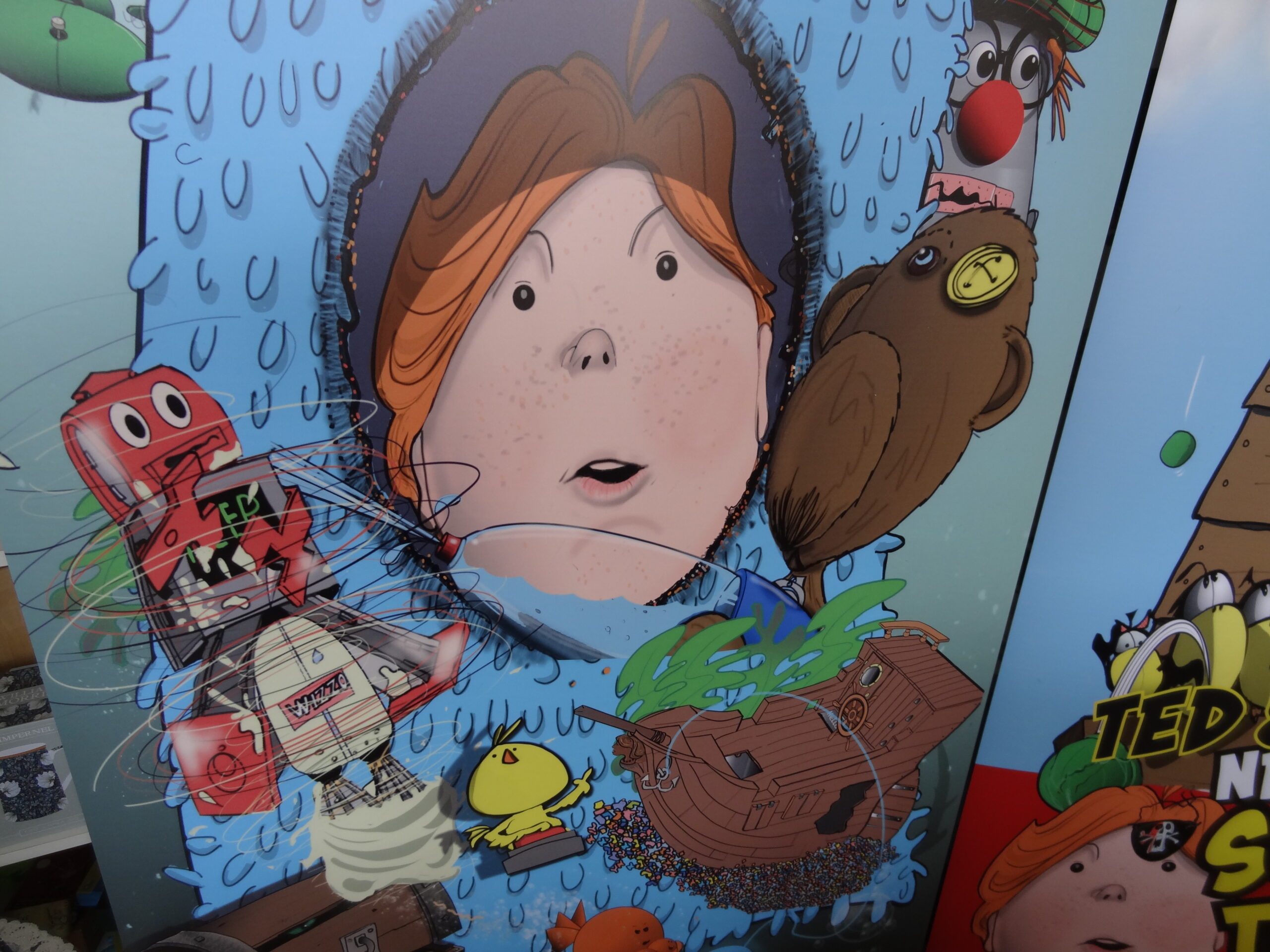 Let me introduce you to Oscar. He is a nine year old boy who lives at home with his Mum and Grandad, known as Grandy.  Oscar loves playing with his toys in his bedroom with his friends, Ted who is his best friend, Monkee, Bernard, Robbie and Fish.  Oscar really loves his Grandy, and especially enjoys all the inventions Grandy makes.  Oscar loves football but isn’t very good – he likes all kinds of football – blow football, table football, Subbuteo, and Five-Aside.  His favourite player is Ronaldo and he has a signed picture on his bedroom wall of him, plus his shirt.  Oscar lives in Smallville where nothing usually happens but they do have a local football team Smallville United that he wants to be good enough to play for when he’s 12 years old.  Oscar’s imagination runs wild all the time and his adventures usually begin after he has a nap.  Oscar loves his Mum very much and is a good boy most of the time but he always seems to get into trouble on his adventures and has to be helped by Ted, Bernard, Monkee, and Robbie.

Oscar’s best friend is Ted who goes everywhere with him. Ted is a pyjama case with a zip down the front but there is more than pyjamas inside him, because it is where Oscar hides all his treasures, like his water pistol, rope, playing cards, football cards, torch, yoyo, boomerang, and catapult.  When Oscar looks inside Ted he can never find what he’s looking for.  Ted can always pull something out of his tummy whenever they are in a crisis or something is required.   Ted hates water, and does not like it at all.  He has one eye missing which has been replaced by a big yellow button but we don’t know how he lost his eye.  Ted doesn’t say much, but when he questions something he raises his eyebrow above his good eye.  Ted is rather aloof and loves Oscar but worries about the adventures they end up in.  Ted says nothing during the day whilst Oscar is playing but when they have an adventure he springs to life, usually when Oscar has a nap.

Grandy is retired, but nobody quite knows what he did for a living, however it must have been in engineering and he’s very clever.  He loves making and inventing things but they don’t always work.  Grandy has lots of friends all over the World.  In his shed there is a big telescope and a hole in the roof so that Oscar can watch the stars at night.  Inside the shed Grandy has a desk with lots of draws and the walls are covered in posters and notes.  Grandy often stays all night in his shed and has a toaster with a pot of jam and butter in the corner.  Grandy always takes a flask of tea into the shed and the shed is surprisingly comfortable and warm.  He likes camping, mountaineering, skiing and his best friend is Mr. Gupta who lives down the road.

Bernard is a vegetarian dinosaur who is Monkee’s best friend and lives down the road.  Bernard is mad about growing vegetables, he does it all day unless he’s watching football.  He likes to help Oscar and pops up whenever there is trouble whilst Oscar is on one of his adventures.  Bernard likes all sports, especially snow-boarding.  Bernard is quite timid and quiet until someone or something upsets him that is.

Monkee is a sock monkey made up from a kit that was left on Oscar’s doorstep in a box without an address.  Grandy made the kit up although the stitching wasn’t very good so maybe he didn’t have his glasses on, and gave it to Oscar who then gave it to Ted.  The problem is only Robbie knows what Monkee is saying.  Monkee is mischievous. He also moves very fast and always wants to be on the scene first if he can be.  He likes growing vegetables with Bernard but he’s hopeless at football as he’s too light to kick the ball.  Monkee is streetwise and likes riding on any kind of bike – he has a need for speed.

Robbie is a small robot made from foam.  He has a little TV monitor on his tummy that displays a few words.  Robbie can fly because he’s got jets in his boots.  He loves making cakes and is good with mechanical objects.  Robbie and Monkee are best friends.

Fish is Oscar’s pet goldfish that lives in a bowl by the side of Oscar’s bed.  Oscar found the fish in the local canal.  Fish always wants to go on Oscar’s adventures but is limited about where he can travel to, so sometimes Oscar takes him in a plastic bag to transport him on adventures and days out.  Fish lives in a little ship inside the bowl and is best friends with Juan De Chop who is a Subbuteo football player that landed in Oscar’s fish bowl and has stayed there ever since.  Fish and Juan happily play keeppy-uppy in the bowl all the time.